Masoomin FC had a dream start with Karrar Jassim scoring an early goal to give them the lead before Saltley Stallions FC equalised on the stroke of half time. The Stallions followed that up by taking the lead, scoring their second goal just after the start of the second half.

Masoomin FC had to work hard with a stubborn defensive work rate and a man of the match performance by goal keeper Zish Shivji which paid off when Ahmad Elias scored on his debut just before the final whistle.

The 2-2 draw earned Masoomin FC a point and we move up to 6th in the division 1 standings. 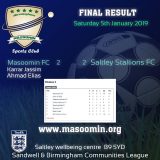